As you all know, we have been facing a constant stream of “3/11” related news continuing even today, and profound sorrow over the Great Tohoku Earthquake lies deep in our hearts. I will never forget this experience for the rest of my life.

Using various means, Japanese artists have been attempting to respond to issues exposed by the earthquake. Some have made alterations to their existing attitudes, and others have brought about paradigm shifts to what they were planning to create. Since that day, a wide variety of statements has been made public by our artists all over the country.

From the viewpoint of my long career of artistic practice, I feel quite secure in declaring that my creations made in the 2011-12 period can be valued as highly significant, meaningful works of art.

In this context I remember when visiting Pompeii (Italy) several years ago, that the view of Mount Vesuvio and its surroundings showed me possible similarities to when Mount Fuji would erupt. In Germany I was also able to experience the threat and consequences of the Chernobyl catastrophe. Moreover, I went to the Port of Kobe directly after the Great Hanshin Earthquake, where I experienced painful, unforgettable tragic situations that have been etched in my brain since then.

Shortly after the devastating earthquake related disaster last year, many foreigners left Japan, however I decided to stay in Tokyo to confront and deal with the situation. On April 24, 2011, I joined the first major anti-nuclear power demonstration since “3/11”, marching together with 3000 people in the streets of Shibuya, Tokyo. Afterwards, I had the opportunity to visit a bay area in Iwate Prefecture, where the devastating scars made my grief even more overpowering.

Since then, almost everyday, I have frankly asked myself if I should continue the paintings I was actually working on, or if I should stop and restart with a new body of works related to 3/11.

As a contemporary artist of present-day Japan, what kind of perception or vision regarding 3/11 should I put forth? What am I expected (or not expected) to do? That had become the biggest challenge for me. As an authoritative response to this, I gradually felt the necessity to relate my new works to the context of the future of Japanese society.

An underlying philosophy in my artistic activity can be analyzed as an eclecticism of diverse kinds of modernisms in different worlds.

This is evident in my works shown at numerous large-scale art fairs (including Art Basel Miami Beach, Armory Show New York, Frieze London, FIAC Paris and Art Cologne), exhibitions in galleries worldwide, as well as through review articles and printed materials, such as books and catalogues.

By re-contextualizing the booth at ART FAIR TOKYO 2012, I am hereby transmitting the result of 1 year’s creativity from my atelier directly out towards the world.

Regarding the executed body of works made in the period of 2011-12, I would like to emphasize the following three statements:

1) Embodiment of Aesthetics and Emotions

While simultaneously affirming Futurism, Dadaism and discursive “Western anti-aesthetics” art movements from the 80’s, I cannot ignore the current situation, in which the transmission of information and (moving) images can be freely inter-exchanged via the internet, where “Apple-culture” stimulates a lifestyle of coolness and aesthetic design, and in which the notion of “Kawaii” has been openly conceptualized in contemporary Japanese society.

On another front, in the awe inspiring history of Japanese art (including sculptural works), artistic forms on the theme of natural disasters, such as earthquakes and tsunamis, have been quite common since ancient times.

Additionally, although the gardens in front of Japanese houses are designed with an aesthetic philosophy, one wonders about the chaotic, contradictory city planning all over the country. This sense of incongruity can be applied as one of the characteristics of Japanese scenery.

Given these analyses, videotaped moving images of destructive tsunamis, which in fact embrace “beauty of the greatness of nature,” appear to me as if symbolizing such various conflicts and inconsistencies. This time, it has become the most important challenge for me to find a way to reconcile such antinomies through my work.

2) Perceptiveness in the History of the Canvas

Although a wide range of media is used in contemporary artistic practices, the act of sitting in front of a classic oil painting remains highly fascinating. While the sense of (in-)formalistic expression is compressed and limited because of the two-dimensional canvas, it still attracts, partly due to its long lineage in art history, tremendous amounts of admirers. Employing the simple technique of using paint and brush on canvas to create colors and poetry full of delicate expressiveness and imagination, I explore certain relationships between “human beings and environments.”

Will my paintings be acknowledged as “Japanese” artworks? In my opinion, what we need now is a new method of analysis concerning the issue of national identities, or the “cultural traits” of our own country, in the age of globalism. Nevertheless, I believe that through my allegorical works, which blend Japanese and Western painting styles, the particular consciousness of my artistic attitude can be easily understood.

What I have come to deeply realize in the past one year, from March 2011 to today, is that there are interrelations and synchronicities between “meanings of painting” and “meanings of living.” With my paintings as artistic catalysts, I hope to build up a culturally productive space in this booth, where everyone, whether artists or viewers, can connect with each other’s creativity, and by exchanging ideas, plant seeds of thought, which may grow further in conjunction with others. 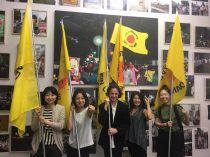 新刊 作品集 „The situation is under control“ 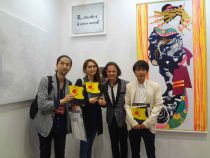 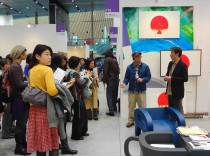 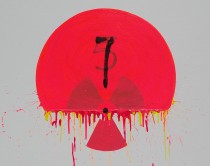 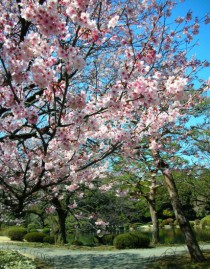 I love my country Japan

Already one horrible week passed since “3/11”. We should never forget this sorrow and suffering during our lifetime.